Canadian home sales down in January 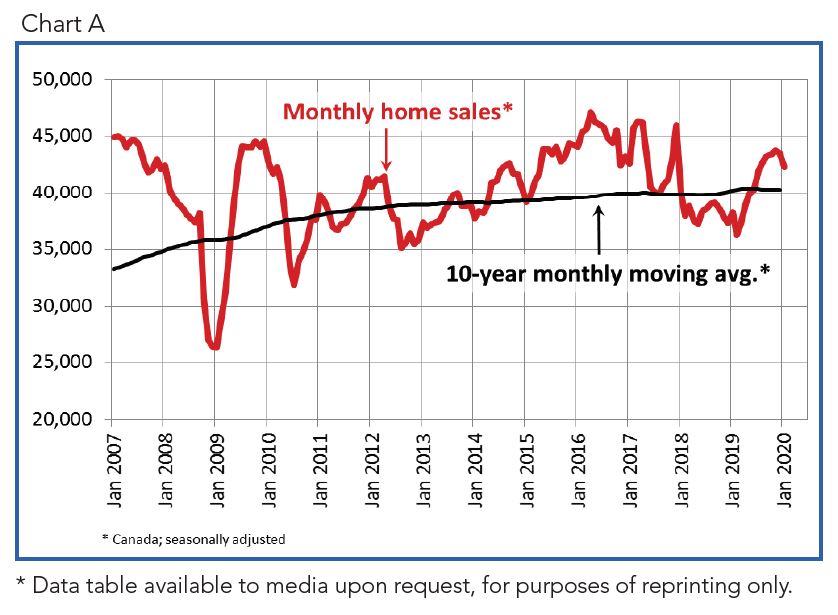 Home sales recorded over Canadian MLS® Systems declined by 2.9% in January 2020, although they remain among the stronger monthly readings of the last few years. (Chart A)

Transactions were down in a little over half of all local markets in January, with the national result most impacted by a slowdown of more than 18% in the Lower Mainland of British Columbia. While there were few notable gains in January, it should be noted that many of the weaker results have come alongside a shortage of new supply in markets where inventories are already very tight.

Actual (not seasonally adjusted) sales activity was still up 11.5% compared to January 2019, marking the best sales figures for the month in 12 years. Transactions surpassed year-ago levels in about two-thirds of all local markets, including most of the largest urban markets. As mentioned, some of the larger markets where sales were down, such as Ottawa and Windsor-Essex, are currently among some of the tightest supplied markets in Canada.

“Home price growth continues to pick up in housing markets where listings are in short supply, particularly in Southern, Central and Eastern Ontario,” said Jason Stephen, president of CREA. “Meanwhile, ample supply across the Prairies and in Newfoundland and Labrador is resulting in ongoing competition among sellers. All real estate is local, and nobody knows that better than a professional REALTOR®, your best source for information and guidance when negotiating the sale or purchase of a home,” said Stephen.

“Looking at local market trends across the country, one thing that stands out in markets with historically tight supply is a larger than normal drop in new listings at this time of the year,” said Shaun Cathcart, CREA’s Senior Economist. “The logic being that if you are a seller, you’re not just choosing when to list but effectively when to sell, so why not hold off until the spring when the weather is better, and more buyers are looking? Deferred listings mean deferred sales, which could explain some of January’s decline in activity. The question going forward is how many sellers are out there waiting to list their property, how much demand will respond, and how that will impact prices later this year.”

The number of newly listed homes was little changed in January, edging up a slight 0.2% on the heels of a series of declines which have left new listings at a near decade low. January’s small m-o-m change came as the result of declines in a number of larger markets, including Calgary, Edmonton and Montreal, which were offset by gains in the York and Durham Regions of the Greater Toronto Area (GTA) where new supply bounced back at the start of 2020 following a sharp slowdown towards the end of last year.

With sales down and new listings up slightly in January, the national sales-to-new listings ratio fell back to 65.1% compared to 67.2% posted in December 2019. Even so, the long-term average for this measure of housing market balance is 53.8%. It has been significantly above that long-term average for the last four months. Barring an unforeseen change in recent trends between the balance of supply and demand for homes, price gains appear poised to accelerate in 2020.

Considering the degree and duration to which market balance readings are above or below their long-term averages is the best way of gauging whether local housing market conditions favour buyers or sellers. Market balance measures that are within one standard deviation of their long-term average are generally consistent with balanced market conditions.

Based on a comparison of the sales-to-new listings ratio with the long-term average, close to two-thirds of all local markets were in balanced market territory in January 2020. Apart from a few areas of Alberta and Saskatchewan, the remainder were all favouring sellers.

The number of months of inventory is another important measure of the balance between sales and the supply of listings. It represents how long it would take to liquidate current inventories at the current rate of sales activity.

There were 4.2 months of inventory on a national basis at the end of January 2020 – the same as in November and December and the lowest level since the summer of 2007. This measure of market balance is now a full month below its long-term average of 5.2 months. While still just within balanced market territory, its current reading suggests that sales negotiations are becoming increasingly tilted in favour of sellers.

National measures of market balance continue to mask significant and increasing regional variations. The number of months of inventory has swollen far beyond long-term averages in the Prairie provinces

and Newfoundland & Labrador, giving homebuyers ample choice in these regions. By contrast, the measure is running well below long-term averages in Ontario, Quebec and the Maritime provinces, resulting in increased competition among buyers for listings and providing fertile ground for price gains. The measure is still in balanced market territory in British Columbia. 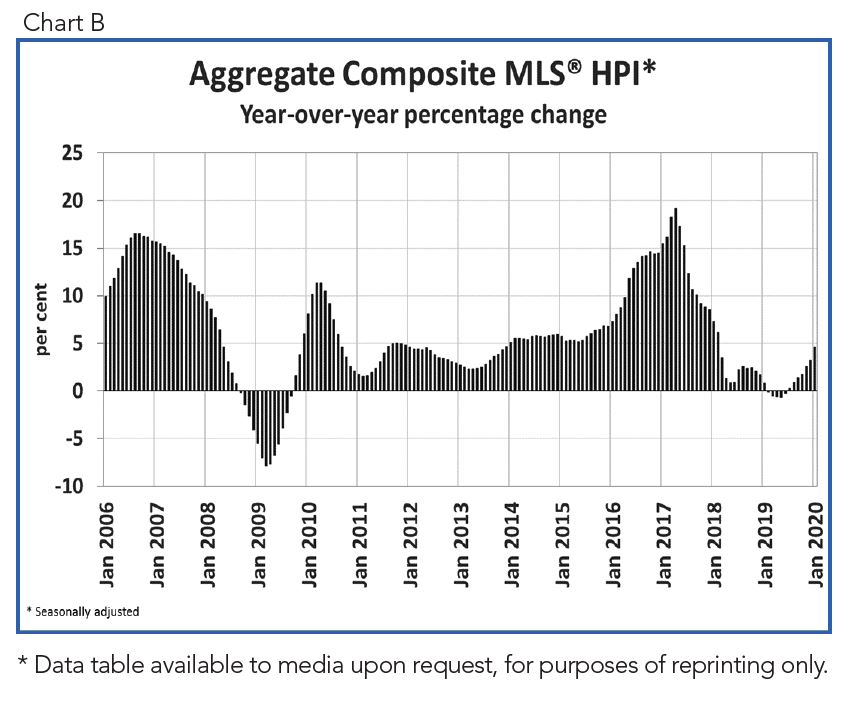 The Aggregate Composite MLS® Home Price Index (MLS® HPI) rose 0.8% in January 2020 compared to December, marking its eighth consecutive monthly gain. It is now up 5.5% from last year’s lowest point in May and has set new records in each of the past six months. (Chart B)

The MLS® HPI in January was up from the previous month in 14 of the 18 markets tracked by the index. (Table 1)

Home price trends have generally been stabilizing in most Prairie markets in recent months following lengthy declines. Meanwhile, prices are clearly on the rise again in British Columbia and in Ontario’s Greater Golden Horseshoe (GGH). Further east, price growth in Ottawa, Montreal and Moncton continues as it has for some time now, with Montreal and particularly Ottawa having strengthened noticeably in recent months.

Comparing home prices to year-ago levels yields considerable variations across the country, although for the most part trends are still regionally split along east/west lines, with rising gains from Ontario east, and a mixed bag of smaller gains and declines in B.C. and the Prairies.

Calgary, Edmonton and Saskatoon continued to post small y-o-y price declines, while the y-o-y gap has now widened to -6.9% in Regina.

In Ontario, home price growth has re-accelerated across most of the GGH, with a number of markets getting close to double digits. Meanwhile, price gains in recent years have continued uninterrupted in Ottawa (+13.7%), Montreal (+9.8%) and Moncton (+6.4%).

All benchmark home categories tracked by the index accelerated further into positive territory on a y-o-y basis, with similar sized gains among the different property types.

The MLS® HPI provides the best way to gauge price trends, because averages are strongly distorted by changes in the mix of sales activity from one month to the next.

The actual (not seasonally adjusted) national average price for homes sold in January 2020 was around $504,350, up 11.2% from the same month the previous year. This was the largest increase since mid-2016. 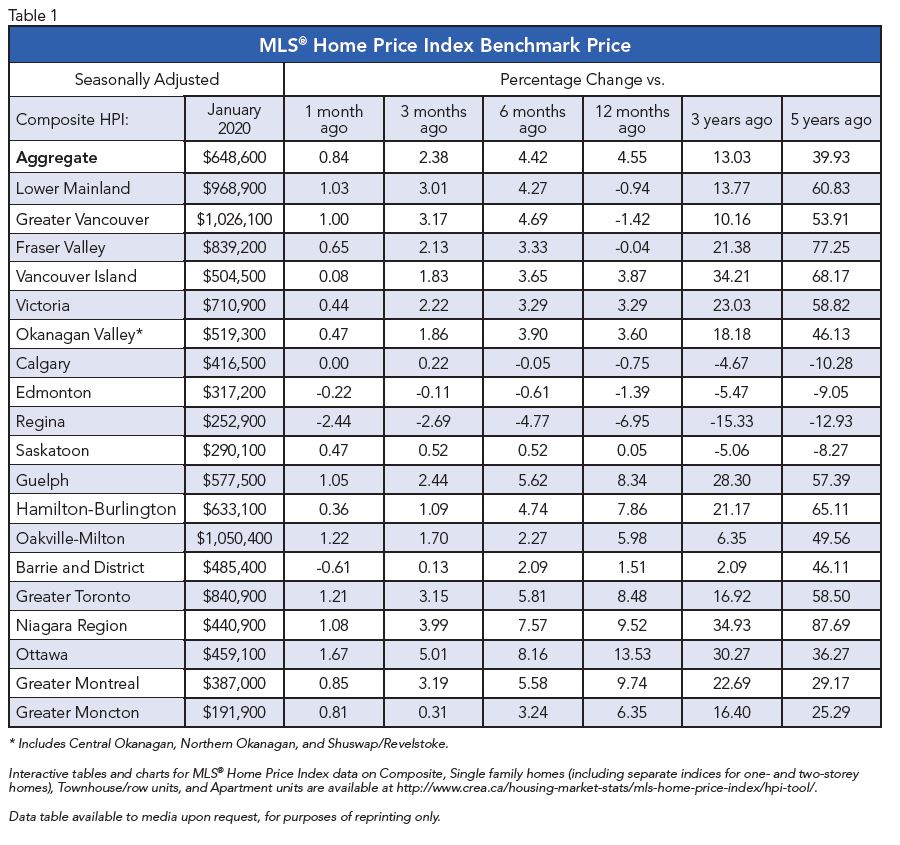 PLEASE NOTE: The information contained in this news release combines both major market and national sales information from MLS® Systems from the previous month.

CREA cautions that average price information can be useful in establishing trends over time, but does not indicate actual prices in centres comprised of widely divergent neighbourhoods or account for price differential between geographic areas. Statistical information contained in this report includes all housing types.

Further information can be found at http://crea.ca/statistics.